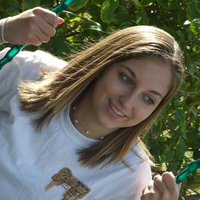 Think that women have no place in talking about gaming and technology? Well, Kyria here is the part of the team to prove you wrong. Bringing you the female perspective, she will make sure you're up to date with the latest news in all things tech, while keeping you plugged in to The Weekly UpStream, in her words, "the best segment on the show." Even if you're not as nerdy as the boys on the show, Kyria's here to deliver the news in much more understandle terms, and touch on topics the average tech user would be interested in. Plus, she just makes the whole show look better all around.

By now everyone is aware of how great the iPhone actually is...not very great at all. Finally, it looks like Apple is attempting to step up their game. With new software being released in June, the iPhone 3Gs will have a few changes. One of the big changes rumored to be in the works is Microsoft Bing becoming the new default search feature for the iPhone. Yes, Microsoft and Apple are not two things you would usually find together, but this could be good for Microsoft.

Facebook hackers be aware! A new feature will be implemented on Facebook to prevent hackers from entering your account. Pretty soon users will only be permitted to access their profile from "approved" computers and handheld devices (mobile phones and iTouch.) With over 400 million "Facebooker's" across the world, the site felt that security needed to be heightened a bit.

If you weren't sure yet, Facebook is taking over the world! Well, at least the Internet. We've all become accustomed to clicking "like" button on the social networking site when something interests us and now we'll be able to do it on a number of other sites. This feature is intended to make the web "more social." Essentially, everything on the Internet will be linked to Facebook. When you "like" a photo, link, or web page, it will post directly to your wall. Many have also noticed the "link-website" box that pops up when you sign into your account. This will link your accounts from sites like Gmail with your Facebook. If you don't already have a Facebook, it's about time you get one!

read more...
CNN:What you should know about Facebook's changes

Since technology allows you to access pretty much any information you could ever dream of, you would think Internet users would take extra precautions to protect themselves from fraud. Well, Blippy, a site that permits users to share information about their online purchases from retailers such as Netflix, Woot, and eBay, did not do a very good job of protecting private information.

The site was intended for consumers to share their purchases with others looking to buy the product, but how much information is too much? When signing up for Blippy, they lead you to believe that the only information that will be shared is the item or service purchased, the amount, and the retailer. It was recently discovered that when a Google search was performed on some the the products, the entire credit card number and address were exposed. Bippy users were not aware that this information was being shared.

Remember that school district in Pennsylvania? Yes, we're referring to the Lower Merion School District, the one that allegedly caught students performing inappropriate behavior through webcams in the district-issued latops. The boy's parents were unaware that an override feature allowed the county to access the webcam at any time. On November 11, the student was called into the office and punished for "inappropriate behavior" caught on the webcam. Turns out, some of the images captured were of the boy half-dressed. Also, personal instant messages were viewed without merit.

The override feature was intended to track stolen laptops, and while activated was capable of taking photos on the webcam and screenshots every 15 seconds. Blake Robbins and his parents were not happy when they found out the school had over 400 personal shots. When the laptops were issued, an agreement was signed agreeing to not engage in inappropriate behavior on the laptop itself, but that doesn't include what the student was doing in his home when the photos were captured.