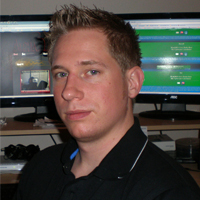 Jon is a F5 Live co-host and UpStream contributor as well as the Chief Cash Officer of PLuGHiTz Corporation. We don't know how he wears so many hats so well or how he still finds time to feed his need for all things tech but some questions are best left unanswered. If you're up for a challenge go find him on Xbox Live @shinobiJon and if you figure him out...let us know.

Pikman 3 and Wii U For You

Pikman was a fun, family-friendly title that provided countless hours of entertainment for children and families around the world. Finally, after 10 years Nintendo decided to blow the dust out of the cartridge and introduce Pikman 3 for the Wii U during their E3 2012 Press Conference. Not surprisingly, Miyamoto and his trusty translator made it a point to show off what Pikman 3 being a Wii U title actually meant for gamers. The most oblivious improvement comes from the enhanced graphics of the Wii U but Miyamoto also mentioned the extra resolution will make it much easier to deal with Pikman that are spread out across a large area. The gameplay mechanics have also changed a bit as your Pikman can manipulate the environment to build bridges and you have much greater control over targeting. Now you can discover and hone in on key items in the environment or weak spots on enemies to be much more effective in combat. There is also new type of Pikman, the "Rock Pikman," which is used for breaking hard surfaces and enemies that stand in your way.

To accurately control your horde of colorful Pikman you have the option of basic controls that utilize the Wii Remote Plus and Nunchuck or exclusively using the Wii U controller that provides some more advanced options. Depending on which you chose, the gameplay you experience will be different. For example, using the Wii Remote Plus and Nunchuck combination gives you a the more specialized targeting that adds depth to the battle at hand. If you go the Wii U controller route, the game seems to act more like an RTS (real-time strategy) where your focus is more about managing 4 groups of "Leaders" and Pikman at a time. This is done by dedicating the Wii U controller's screen to acting as a map that improves your ability to navigate to the different groups.

If you didn't get to try it out on the show floor then you'll just have to sit tight until whenever the TBA 2012 release date ends up being. In the mean time, check out the Pikman 3 portion of the Nintendo E3 2012 Press Conference after the break.

For those of you who feel saddened because your glorious video game achievements and heroic epic fails seem doomed to live forever in the obscurity of your memory then you'll want to pay attention to Elgato's Game Capture HD. I had the pleasure of speaking with Tim Both, Elgato Systems brand manager, at ShowStoppers during E3 this year and we got live demo of the hardware and software in action.

The way that the Game Capture HD works is pretty simple. You have an Xbox 360 and/or a PS3,TV and a Mac or PC. The Game Capture HD hardware had an HDMI pass-through that catches the feed from your console and sends it to your computer via USB 2.0 in 480i/p, 756p, 720p and 1080i outputs without losing a single frame. So you've got a couple options even if somehow you don't have an HDTV to go with your HD game console. Elgato Systems also has their own software that makes it easy to work with your footage. Check out more after the break and get a first hand look.

During Sony's E3 2012 Press Conference they decided to mention PlayStation Suite, seemingly because they felt like they had to. Over the 2 minutes and 32 seconds they dedicated to it there were two important announcements. The first was that PlayStation Suite has been renamed to PlayStation Mobile. For those of you who are unfamiliar, PlayStation Mobile is Sony reaching out to 3rd party game developers on any "open platform" in an attempt to bring the best of gaming to mobile phones and tablets.

The second important announcement is that HTC will be the first third party manufacturer to work with Sony in producing "PlayStation Certified" devices that will bring the best gaming experience to the masses. Now, if Sony is going to blow over a major topic and leave fans with more questions than answers, like they did, they at least know to take a subtle dig at Apple to help smooth things over. This is why they made it a point to emphasize that they are supporting an open platforms.

Check out the Sony press release after the break and watch the Sony E3 Press Conference segment about PlayStation Mobile as well.

God Save the Queen! ZombiU is Coming to WiiU

The WiiU's premiere zombie game made it into Ubisoft's E3 2012 Press Conference and at first glance it might bring some new life to the genre for Nintendo fans. We weren't fortunate enough to see live game play so it's difficult to speak about the graphics but the preview we were given looked polished for what ever that's worth. The setting is England, which has always been a bit scary to me even without a zombie apocalypse so they seem to be off to a good start there. Since ZombiU is an exclusive WiiU title what really shines about this game is the integration with the WiiU Pro Controller and we'll discuss that in greater detail after the break.

Rayman Legends Comes to the Wii U

Micheal Micholic, Senior Game Manager for Rayman Legends came out on stage during the Ubisoft E3 2012 Press Conference to fill us in on what we can expect to see Rayman and his new accomplice Murphy to accomplish with his new Wii U Pro Controller. One thing that stood out right away was that the controller created a ton of actionable combos for the 2-player mode, all the way up to a five player experience. Rayman developers credit this to the analog sticks, buttons, touch screen and gyroscope features available on the Wii U Pro Controller.

At one point, the person playing the live demo had to physically turn the Wii U Pro controller almost 360 degrees to get Rayman through a loop so as you can see there's a lot of new controls to get acquainted with. In the 2 player mode, the second player (Murphy) sees a different screen on their Wii U Pro Controller than first player. This allows them to have their own unique experience that is complementary to the first player's and very useful for helping both of them complete the level. It was pretty cool to see the fun, get your friends together type of game. Rayman Legends is complimented so well by the Wii U Pro Controller. Check out the video after the break to see for yourself.