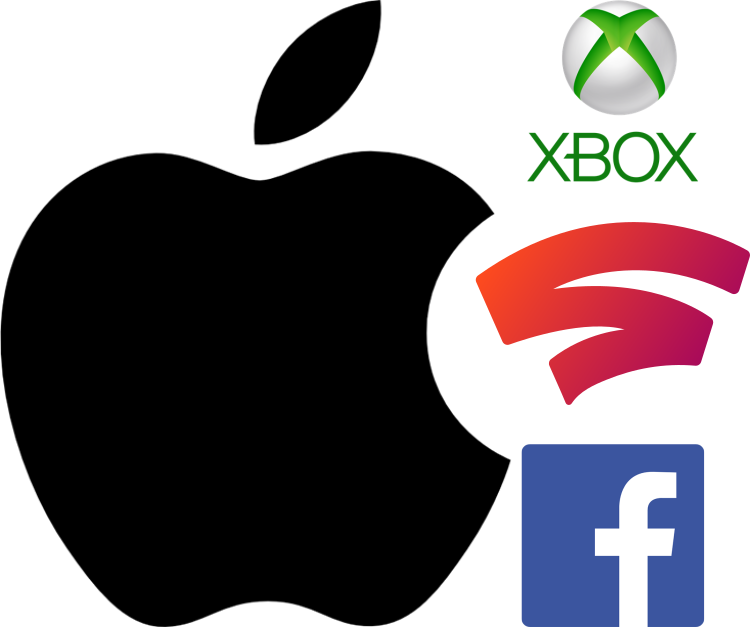 One of the emerging videogame industries is game streaming. While OnLive may have been ahead of its time, Sony has PlayStation Now, Google has Stadia, and Microsoft has Project xCloud, which will soon be released publicly as Game Pass Game Streaming. While Microsoft has been running a limited test of xCloud on iOS through TestFlight, it turns out it is a feature that will never be because of Apple.

Apple's App Store policies apparently prohibit apps from providing access to content that Apple does not have 100% control over. Apple wants individual approval over each game available on its devices and wants to be able to individually list each one. That is not how game streaming services work, as the game catalog is managed remotely and are only listed through the streaming service itself. It seems like Apple is looking at these services as external app stores that bypass Apple's walled garden.

As a result, companies that are affected by this decision have begun to speak out on the topic. Microsoft said of the conflict with Apple,

Apple stands alone as the only general-purpose platform to deny consumers from cloud gaming and game subscription services like Xbox Game Pass. Unfortunately, we do not have a path to bring our vision of cloud gaming with Xbox Game Pass Ultimate to gamers on iOS via the Apple App Store.

While this a big disappointment to owners of iPhones, it is far from the first service to be affected by the decision. Google Stadia, which released in late 2019, is available across multiple platforms, including Android and Chrome browsers. However, the platform is only marginally available on iOS. You can browse and buy but cannot play on the device.

Facebook just launched its Facebook Gaming Marketplace, but, like Google Stadia and Xbox Game Pass, it has been neutered by Apple. The marketplace on Android allows you to play games within the app, but on iOS, that feature is missing. Sheryl Sandberg, COO of Facebook, said,

Unfortunately, we had to remove gameplay functionality entirely to get Apple's approval on the standalone Facebook Gaming app. We're staying focused on building communities for the more than 380 million people who play games on Facebook every month -- whether Apple allows it in a standalone app or not.

The heat against Apple and their famous walled garden has been heating up in recent months. Epic Games famously skipped Apple for releasing Fortnite on mobile. ProtonMail has taken swings at Apple, saying,

Apple has become a monopoly, crushing potential competitors with exploitative fees and conducting censorship on behalf of dictators. We know this because we have quietly tolerated this exploitation for years.

Most importantly, there are several antitrust suits in the EU, including one filed by Spotify in March 2019. The EU has taken these complaints seriously, with an active ongoing investigation into Apple's business practices. Eventually, either the EU's research or the growing rift in customer experience between iPhone and other platforms is going to catch up with the company and a change will need to be made.

This week, we're feeling the presidential ban hammer, upset by the Apple walled garden, and jealous of the Quibi free tier.

Scott is a developer who has worked on projects of varying sizes, including all of the PLuGHiTz Corporation properties. He is also known in the gaming world for his time supporting the DDR community, through DDRLover and hosting tournaments throughout the Tampa Bar Area. Currently, when he is not working on software projects or hosting F5 Live: Refreshing Technology, Scott can often be found returning to his high school days working with the Foundation for Inspiration and Recognition of Science and Technology (FIRST), mentoring teams and judging engineering notebooks at competitions. He has also helped found a student software learning group, the ASCII Warriors.

Last week, President Trump told a group of reporters that he was looking to ban TikTok in the coming days. The ban is over national security issues after it was revealed the company was copying data from users without letting users know. This comes after months of companies and governments around the world banning the app in various forms. Many companies have banned the app from corporate phones. The US and others banned its use on government phones and, in some cases, banning employees and the military from using it entirely.

One of the emerging videogame industries is game streaming. While OnLive may have been ahead of its time, Sony has PlayStation Now, Google has Stadia, and Microsoft has Project xCloud, which will soon be released publicly as Game Pass Game Streaming. While Microsoft has been running a limited test of xCloud on iOS through TestFlight, it turns out it is a feature that will never be because of Apple.

In the crowded field of social media, one brand we did not expect to be talking about in 2020 is Google+. The service ran from 2012 until 2019 when Google shut it down following poor consumer reception and, acting as the final nail in the coffin, was a revealed data breach. Because of that breach, a small number of affected users came together to file a class-action suit against Google, a move that was almost inevitable. While the case has gone on for the past year, a settlement has finally been reached.

Quibi is far from the darling of the streaming video industry. In fact, the company was confusing even before its launch. The professionally-produced short-form content concept didn't make a lot of sense to most of the industry, but T-Mobile saw the potential. While there were a lot of initial signups, the company struggled to convert trials to paid memberships. It could be that people weren't interested in paying $5 per month to watch maybe one or two interesting shows (Reno 911!, anyone?).