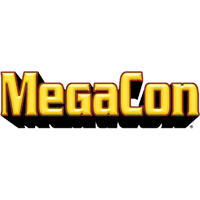 Everyone is a fan of something, and MegaCon is a place to celebrate all things pop culture. Get an autograph or a photo with your favorite guest and get the inside scoop about your favorite movies & TV shows at our celebrity panels! Watch professional comic artists battle it out in our popular Sketch Duels, learn from our "How To" workshops, and take photos with your favorite costumed characters! It's also a great place to buy a unique gift (or treat yourself!) with over 400,000 square feet of shopping madness.

We all loved our Legos as kids, but some kids never grew up. Felix Greco of the Greater Florida Lego Users Group (GFLUG) talks with me about their group and all the hard work that goes into building such intricate designs out of Legos. We met these guys last year at MegaCon and were so impressed we knew we just had to get their wonderful creations on video. For pictures of their work, check out the PLuGHiTz Live! Radio page on Facebook!

Hit the break to see the interview with Greco and some of the incredible creations.

Shroud of the Ancients at Florida MegaCon 2010

Everyone seems to love table-top RPGs, at least once they get past the stigma of being a D&D nerd. However, it has been difficult to dethrone the kings of the genre. Rod Edwards, Vice President of Dark Tavern Press, talks to me about their new D5 tabletop role playing game, "Shroud of the Ancients." We believe if someone has a chance to take control away from Wizards, it is these guys.

Hit the break to check the interview with V.P. Edwards and hear about "Shroud of the Ancients".

read more...
PLuGHiTz Live!:Shroud of the Ancients at Florida MegaCon 2010

We have seen more than our fair share of indie sci-fi series and this year at MegaCon we saw yet another. This one is different, however. These guys do a great job and have the talent to keep people interested for more than the opening sequence. Here Captain Richard Sheppard (Ben Boardman) of the web series Star Command talks to me about the series, its origins and where it is going from here (TO SPACE).

Hit the break to see the interview with Ben Boardman as he talks about the series.

Last year Scott and I wandered up to Orlando for a Saturday trip to MegaCon just to see what in the hell was going on there and we essentially did the same thing this year while our friend Cody tagged along. Immediately on arrival we noticed a key difference from the previous year (I'm not talking about Cosplayers seemingly wearing less and less each Con). The line to get in was longer than the time it takes to complete a Gran Turismo game and about as enjoyable as repeating endurance races. Finally, we found our way to a faster and shorter line outside that only took an hour of our day. Later on we found out that the lines were so long because there were 3 other conventions happening at the same time, one of which was a cheerleading convention that was epic because it's always fun to see normal people who don't know what the hell is going on and gage their reactions.

After all the unnecessary line hopping and time wasting we were finally able to go where we boldly went before the previous year. On average MegaCon draws about 30,000 people over it's 3 days of operation. This was evident by the amount of densely packed people and vendors on the floor. There seemed to be more this year than last year but one thing about MegaCon is they always seems to have several exceptional vendors that we end up talking, interviewing and/or befriending. One of which was a group of 10 or so Sci-Fi enthusiasts who have created a series called "Star Command" which consists of full episodes and shorts that puts a comedic and more realistic spin on deep space starship travel. The basic premise is that the USS Lee is falling apart and it's captain is a disgraced loser but they somehow are able to stumble their way into surviving in the end. You can check out their web series at the Star Command website and I suggest that you do. Anyone who appreciates Sci-Fi will appreciate this. At some other point in the day (it all blurs toghether) we also ran into a rather interesting tabletop RPG called Shroud of the Ancients. I say interesting because the game itself is very versatile from the shape of the dice to the rules of the game. For example, there are no classes, no levels and no limits (WOW players QQ) but the game is still D&D compatible as well. Shroud of the Ancients has been recognized at Dragon*Con and is close to debuting as a full versioned game sometime soon. For more on this go check out Shroud of the Ancients website.