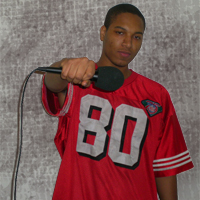 Russell was the head journalist for PLuGHiTz Technologies as well as a co-host on PLuGHiTz Live! Radio. He is known as the token black guy of the show, and presents a compilation of top ten random facts for the "Russell's Hustle" portion of the show. He is a journalism student at the University of Florida. He is most known for his love for fighting games such as the Street Fighter series, the Marvel vs. Capcom series, the Dead or Alive series and the Soul Calibur series. He also spends most of his time playing adventure games (Okami anyone?).

When reading on the FTC's notion that online bloggers cannot be considered journalists, I start to think of a few things. The FTC believes that because a blogger is sent free consoles/video games to keep for trying out the games for review, it somewhat means that it will automatically breech one's integrity. Yet if you look into music magazines, the companies are given free CDs to review for the magazine. Do we deny magazine reviewers the badge of journalism? Or how about when a movie critic gets free screenings and posters to all just for reviewing a movie? Are we going to cast doubt on his integrity as a journalist?