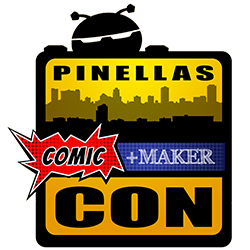 The biggest comic con in Florida's most densely populated county! For fans of comics, gaming, anime, cosplay, and makers/hackers!

In the past few years cosplay has gone from a niche term known mostly within the convention realm to a widely known concept with TV shows dedicated to the topic. A lot of people in the community, like the 3000 Brigade are dedicated to their craft, few are as dedicated as the 501st Legion. This group of Star Wars enthusiasts don't just dedicate their time to making their costumes, they also dedicate their time to charity.

Their costumes are incredibly detailed, needing to conform to the specifications of Lucasfilm and Disney. This is because their members from across the country are invited to march in the Star Wars Weekends parades at Disney's Hollywood Studios - the perfect thing to do in the summer in Florida. During the rest f the year, though, they take their custom costumes to children's hospitals and the like to entertain the kids. It is a great way of combining their own love of the franchise with the ability to cheer up sick kids.

Nick and Daniele spoke with Dylan Scott about the organization, what they do and what it would take for you to get involved.

When you think of animation studios you are likely to think of Los Angeles our New York; you are unlikely to think of the Tampa Bay area. St. Petersburg-based Echo Bridge Pictures is trying to change that through their work.

From a show that aired on Nick Toons to their own internal projects, this studio is making a name for themselves as well as providing employment opportunities for artists in the community. Their current internal film is in the early stages of production, but they hope to have it on the festival circuit sometime in 2016.

Nick and Daniele spoke with Esteban Valdez about the origins of the studio, why he opened in Florida and where they are headed in the future.

Local artists come in all types, and we had the opportunity to speak with Niicola Cuti, a local comic book artist. He has been involved with projects for Marvel and DC, as well as a couple of books of his own. In fact, at the moment he is working on stories featuring his character Moonie, who has had a long run.

We were then joined by Moonie herself, who came to talk about who she is and her stories, Her newest story was just released as part of the convention and is available now. Next for Moonie and Cuti is film production of a previous Moonie story. You can find out about all of Moonie's adventures at Moonie Productions.

One local maker we have gotten to see grow her business over time is Pam French. Her product is the Pami Pocket, a small shoulder bag designed to carry a cell phone and other little items such as a driver's license or credit card.

Initially created as a personal solution, she ended up bringing it to market because she had a lot of interest in hers and could not find anything else like it. Originally available only direct, she expanded into selling in some boutiques. Since we last met she has also secured retail space in some local Walgreens stores, with hopes to enter more.

Nick and Daniele discuss with Pam where the company came from, where it has been and where it is going.

While the 501st Legion brings a tilt of space battle to an event, the Real Tampa Bay Ghostbusters bring the paranormal. This cosplay group brings the same kind of dedication tot heir craft as our previous guests, while focusing on another franchise which is also getting a new lease on life.

Using their skills and incredibly detailed costumes, the group travels to children's hospitals and the like to cheer up sick kids and their families. The team has had several memorable moments, but Patrick Creel recounts one of his favorites, which led to a kid getting to watch the movie for the first time.

Whether a cosplayer, collector or a fan of a franchise, detailed props are really popular. Douglas Moody of Mjolnir Hammers stopped by the studio to show off some of his work. His Thor hammer was impressive, with incredible weight and detail. Written in proper style is his name, guaranteeing that his props are always unique and identifiable. He even had someone at a con able to read the text.

Moody also told us the history of his getting into the work, which involved cancer, a miracle and a second chance. It is a story that nearly brought our hosts to tears. It is a story and some really cool products, all worth your time.

Dealing with the troubles of coming back from war can be difficult for a soldier. Luckily for Greg Plaisted, he found art as a way to express himself. In fact, he found a group of artists who challenged one another to produce works that help both with expression and with the ability to find calm and quiet.

In his time drawing, he has created some truly impressive works. He shows off a few, including a zombie Pikachu, which was a response to one of his artistic challenges, and chosen because his son is a fan of the character. While he may be new to the convention scene, because of the crowds, he is excited about the very positive response to his work and is likely to be seen around again.

One of the best parts about attending events like Pinellas Comic and Maker Con is getting to experience local artists and their work. For us, getting to continue covering these types of events means we get to watch those artists progress over time.

We first met Anakhet, a local chain mail artist who operates Gypsy's Weavings, at Gulf Coast MakerCon this year, where Daniele and Scott fell in love with her work. Since then, like any good artist, she has continued to perfect her style and expand her capabilities.

Nick and Daniele spoke to her about where she started, what is new since April and what we can expect from her in the future.

In our local community there are some people who are so active we have the pleasure of seeing them all the time. Mo Eppley of NerdTag.me is one of those people. From maker events to MetroCon, she seems to be everywhere we go. That's a good plan for her and her company, because they sell custom printed dog tags and other 3D printer items.

The tags feature characters and symbols such as the Minions and super hero icons and self for between $10 and $15, depending on colors. As Nick shows off, he has had 2 of their tags on his keys since we first met over a year ago, and they look today as they did the day he got them.

One of the most interesting aspects of the tags is that they are printed on a 3D printer designed and built by the company, called FreeFab 3D. When we first met them, they had just sold their first unit and today the company is taking pre-orders for their second model, which is enclosed.

Nick and Daniele spoke with Mo about the changes in the company, including their moving out of her office and into their own facility.

In the world of collectables there are two types: replicas and limited or custom built items. Garrett Bostwick from Massive Merchandise came by to talk about the latter. He makes custom items, like the Magic: The Gathering custom card box he brought with him. These items are made entirely from scratch, including the box and the laser engraving.

Bostwick doesn't just focus on comic and geek-related events, though. He also participates in biker events, which he says drives about half of his business. For those events he creates similar types of items, but with different intents and different engravings.

We like to end our coverage with the event director, and for Pinellas Comic and Maker Con that person is Chad Mairn. During the day he is a librarian for St. Petersburg College in Seminole and also runs the school's Innovation Lab. During his free time, though, he plans and builds incredible community events.

Last year, the event's initial year, he originally planned for 600 attendees and received 3,400 instead. While a good problem to have, it almost got the event shut down by the fire marshal. This year, however, the event grew to take over rooms all over the campus. A rough estimate puts this year's attendance at around 5,000.

Chad discusses some of the problems he has faced in bringing this event to reality, as well as how the school did everything in their power to make it easier for him to expand.