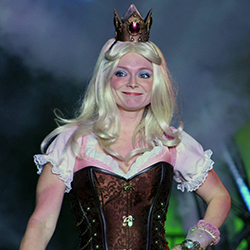 Erin Hurst has been cosplaying for almost 20 years, but don't call her out on it. It just makes her feel old. As a complete and total drama nerd she found a way to bring her passion for theater and cosplay together forming the 3000 Brigade, aka 3KB. Erin has been writing, directing, and acting in what has become the largest active cosplay performance troupe in the country. The troupe began in 2007 and this year marks a decade worth of 3KB performances. She is extremely grateful for her stage manager/costume coordinator Jessica Koesters and technical director JoAnn Minieri.